Southport hit the road again on Saturday with a trip to bottom placed AFC Telford.

It will be a real reunion with Paul Carden now in charge of the home side and he is assisted by ‘Port favourite Carl Baker two of our manager’s best pals in football.

Southport go into the game unbeaten in 14 matches in all competitions and have only conceded twice in the last 8 games a run that has seen the rapid rise up the table.

Everyone was disappointed with the late call off on Sunday but it did give some of the players carrying a few knocks longer to recover and everyone will be raring to go on Saturday.

It may be worth keeping an eye on the weather before setting off as the current forecast is for heavy rain on Saturday morning in Telford.

The Yellow Army are running a coach to the game 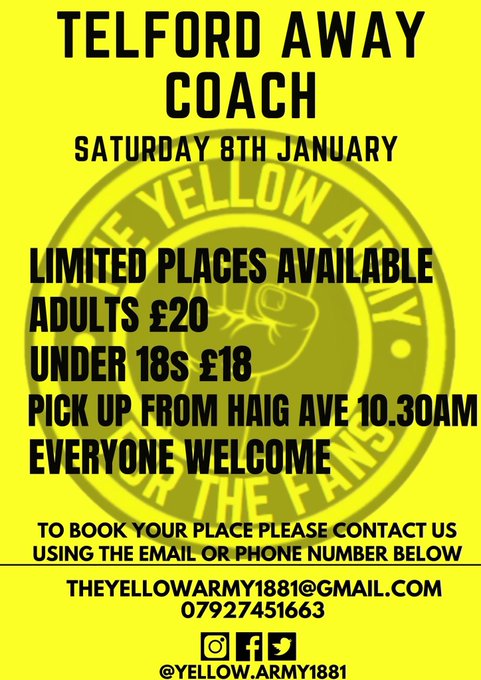 There is no pay at the gate turnstile but supporters will be able to get a ticket from the Telford Ticket Office on the day. The home club, like ourselves, recommend advance purchase to avoid any queuing.

It’s fair to say the home side aren’t enjoying the best season with just two wins but they have made a number of changes recently and seen creditable away draws at Leamington and Chester in their last two matches.

Our record at Telford shows we are due a win. Last season the game was played behind closed doors and ended in a 1-1 draw with Marcus Carver getting our goal.